Editorial: Reverend Strychnine Twitch, and the return of the Foxboro Hot Tubs

Immediately following the band's first song of their first show since 2010, Reverend Strychnine Twitch shouted some breath-starved words: "I need some water..." Anyone familiar with the situation faced by the Reverend's real-life counterpart only a year ago understands the significance of this utterance. Yes, the Foxboro Hot Tubs are back...and drinking water. The Pabst-soaked fiascos that only crates of alcohol could fuel are no longer. Sound boring? Absolutely not. After the Reverend had stumbled over to find his water bottle, he promptly removed the police hat perched atop his head, doused his shaggy mop top with half of the water, and crazily shook out the rest all over the screaming crowd -- an action he'd repeat several times as the band blazed through the hour-long set at Eli's.

In the weeks that followed the announcement of Billie Joe Armstrong's decision to enter rehab, the minds of Green Day fans were completely scattered. We were all glad that Billie Joe would be getting help, but we had no idea what changes the band would face as a result. Would there indeed be a tour to support the band's three new albums? Would their future live shows hit us with the same vigorous fury that they always had? The Foxboro Hot Tubs were one project that I was absolutely convinced would never again see the light of day. I couldn't imagine an alcohol-free Foxboro show. I foresaw the Reverend Strychnine Twitch fading into retrospect, into the memories of the few that were fortunate enough to be cast under his spell for an evening.

The website received an anonymous news submission email in the early afternoon on Saturday, October 26 that hinted a possible Foxboro show that evening. The other staff members and I, though curious, decided to adhere to our no-rumor policy and not say anything of the possible gig unless we received more concrete information. It was almost 1:00AM (my local time) when we finally received confirmation that the Tubbies would play the show, which had been billed as having a "Secret Headliner." We couldn't believe it.

The band were firing on all cylinders, and played what sounded like a knock-out show, based on the video. In one lighthearted moment, The Rev responded to a fan's "Stuart and the Ave." screams with, "...we only have ten songs, I don't know any others!" The band did, however treat the audience to a few extra Green Day tunes, like "Stop When the Red Lights Flash," "Lady Cobra," and "Makeout Party." During the latter, The Rev, writhing on the floor, was handed a guitar. Though strictly a lead-singer/batshit-crazy dancer, he whipped out a flashy '50s-style solo, somehow managing to magically learn to play guitar on-the-spot.

Green Day fans had been under the impression that some of the more hardcore and suggestive songs from the trilogy albums weren't played on the post-rehab tour because of the state of mind in which Billie Joe had written them. On Saturday night, the band played almost the entire Foxboro Hot Tubs catalogue -- in which one would be hard-pressed to find a song free of at least one mention of booze. Billie Joe truly is bigger than his addiction: he seems to have completely overcome it, and can still raucously deliver renditions of the music that flashes back to his struggles. The future of the Foxboro Hot Tubs (and, oh yeah...that other side project...Green Clay? Green Hay?...) has never been brighter, and the sober Reverend Strychnine Twitch is leading the way. 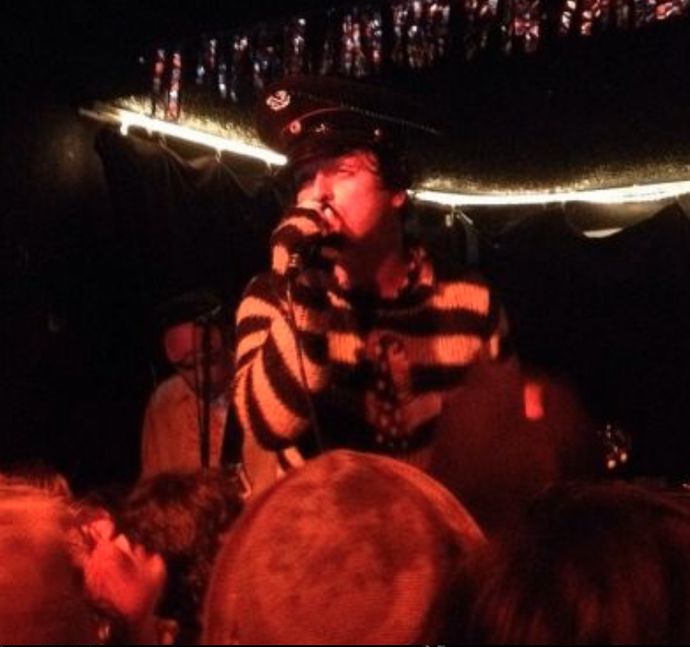